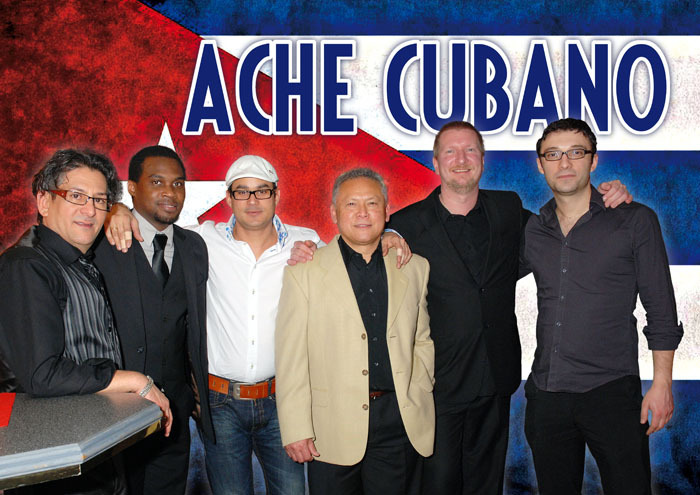 Ache plays Cuban music in the style of Buena Vista Social Club. Made by the Cuban tradition, it blends tradition with modern influences. Ache plays both traditional Cuban songs and original compositions.

Ache Cubano brings a mix of ruma, timba, mambo and son montuno. The group presents the best of Afro-Cuban rhythms and melodies.

Bandleader Ommis Bonet has made it his mission to the wealth of diversity and vitality of Cuban music to share with the world. With Ache Cubano he is constantly looking for talent to authentic as the music of this legendary island continue to live.

For over five years, this Groningen-based Cuban Son band has been well-known in the salsa scene. People from Groningen are accustomed to the band's repertoire and members. Lately the band becomes more present outside Groningen.

Ache Cubano has matured by the experience of the previous years. The band saw an increase in own repertoire. In this way, the band has developed a fully unique sound, by combining traditional Son with modern salsa influences, as well as cuban timba.

The band members have become a great team and amplify their respective qualities. There are always opportunities for solos and improvisation, giving the musicians a chance to show their individual qualities. This makes each concert unique and it makes attending an Ache Cubano event interesting for the music lover.

The progression the band has made in recent years, both in style and repertoire, has been noticed outside Groningen. Ache Cubano now plays everywhere in The Netherlands and abroad.

Summer 2012 Ache Cubano has toured in Bosnia. They played at the 17th Salsa Festival Bascarsijske Noci 2012. Reception by the audience was overwhelming. Ache Cubano immediately afterwards went touring in several german cities like Hanover and Braunschweig, getting much enthousiasm.

Songs Ache Cubano has especially had good reception in Groningen, are: Andar En Habana, Adonde Vas and El Bacalao (studio recordings have been made).

The best surprise of 2012 was a concert in the Oosterpoort at the Latin Dance Night. A festival featuring a/o Maite Hontele, Septeto Nabori and Oscar D'Leon. Ache showed its quality for its own audience in a fully filled venue. Becaus of this success, 2012 may be considered an extremely good year for our own Ache Cubano. The future for 2013 likewise looks bright.