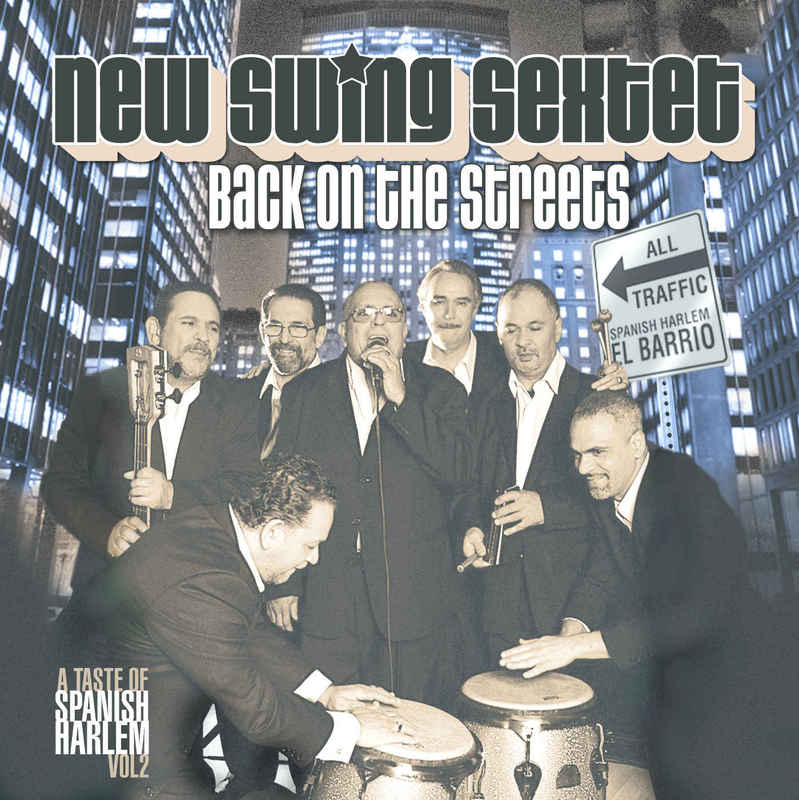 NEW SWING SEXTET, a living legend, on stage through their "50th Anniversary Tour" 2015

A product of New York City and the excitement and turbulence of the 60s, the New Swing Sextet (NSS) made it’s professional debut at the New York World’s Fair in 1965. The band was to become very popular in the United States and Latin America, including the Caribbean, as exponents of an innovative new sound that emerged in the mid-60s known as Latin Boogaloo.

Though the New Swing currently has 7 members, when the group first got together it was composed of 6 members (popularly called a Sextet). During that era (1960s), so many young musicians growing up in New York were exposed and influenced by rock-and-roll, pop, and soul music (in addition to Latin music) which, in our opinion, helped give birth to the latin boogaloo (which was in term related to the cha-cha-cha and guajira rhythms). During the boogaloo’s peak years of popularity, there was also a slight decline in the popularity of mambo and salsa. But the young new bands of that era such as Willie Colon, Johnny Colon, the Lebron Brothers, Joe Bataan, Ricardo Ray and the Joey Pastrana Orchestra, as well as the New Swing Sextet, were responsible for creating a young fresh, joyful yet rebellious sound. Though not as polished as the established latin bands of that era (Tito Puente, Eddie Palmieri, Machito, Joe Cuba etc.) it was raw, and different. The New Swing Sextet also supported many social and charitable events of nascent character, such as The Young
Lords Party (a legendary Newyorrican group in their own right) created by young, educated and brilliant neighborhood people committed to social justice and fighting for better housing and living standards for the people of El Barrio (Spanish Harlem) and the Bronx. A long and great artistic story on stages and concert halls all over the world is born.

In 2015, New Swing Sextet celebrates their 50th Anniversary with a worldwide audience ready for tours shows, dancing, and as usual, their unique style, sound and happiness. Latin Jazz, Salsa and the Boogaloo all live.

** How was the New Swing Sextet created?
NSS was created in 1964 and we first took the stage when we performed at the New York World’s Fair in 1965. It was a wonderful time to be a young musician in New York City. Every neighborhood had latin dance halls and small clubs, and every neighborhood had a latin band (or many latin bands as in Spanish Harlem). Almost all of the clubs featured live music and many venues routinely featured 2 or 3 live bands a night. So in that era every teenage boy, and many girls, wanted to be in a latin band. We weren’t very good in the beginning but we were enthusiastic and determined to make music. It took two years to get our first recording deal (1967) and before you knew it, we were playing 4, 5 or 6 dates every week. We performed alongside Tito Puente, Machito & Graciela, Eddie Palmieri, the Joe Cuba Sextet, Johnny Pacheco, Ray Barreto, Willy Colon and Hector Lavoe, Johnny Colon, Joe Bataan, the Lebron Brothers, Ricardo Ray and Bobby Cruz, Orchestra Broadway, Orchestra Harlow, Pete Rodriguez etc. etc. etc. What an amazing musical education we got and what a great and legendary fraternity of musicians we enjoyed being a part of.

** What are your favorite bands and influences?
Probably most of the bands mentioned above are among our favorites, but we were most influenced by the Joe Cuba Sextet and by Cal Tjader and his latin jazz quintet. After all, we were a vibe sextet. I think that over the years you can still hear the influence of Tjader and Joe’s Sextet in our music.

** How many LP's/CD's have been recorded by New Swing Sextet and what do you believe has been your greatest musical successes as well as the greatest live performance?
• The New Swing Sextet has recorded 6 studio records. Our first recording entitled The Explosive New Swing Sextet under the Cotique Label was recorded it in 1967. It featured songs like our original recording of “Vete Pa Ya,” “Monkey See, Monkey Do” and “Coquero.” Our Second recording entitled A Taste of Spanish Harlem (1968) featured the New Swing and Revue (3 beautiful female
vocalists who accompanied the band for the album) and featured songs like “Belinda” and our original recordings of “El Bongo” and “The Monster.” In 1969 we recorded our Swinging Along album which included our signature song, “My Favorite Things,” “Pico Swing,” “De Que te Quejas,” “El Nuevo Swing Les Toca” and “Think Drink (El Silbidito).” In 1971 we reworded our final studio album under the Cotique Label Revolucionando which included “El Tiroteo,” “Revolucionando and “Requerdos de Rafael.” After the long layoff of over 35 years, in 2008 we released our Grammy nominated Back on the Streets under the Fania Label, which included new recordings of “El Bongo,” “El Tiroteo” and “The Monster” as well as “Bobo Tu Te Quedaras” El Balcon” and “El Raton.” In 2013 we released our latest recording “Yesterday, Today and Tomorrow” under our own NSS Label which includes original recordings “Maybe Then,” “Trabajador Social,” “No Puedo Mas,” “Somos El New Swing” and new recordings of “Vete Pa Ya,” “Revolucionando,” and “El Rajao” as well as new NSS versions of the classic recordings “La Loma de Belen” and “La Bien Paga.” We have also been featured in over 20 other CD compilations, and have had a number of our songs recorded by other artists.
• I think we all would agree (in no particular order) that our greatest musical achievements so far would be our Grammy nomination, our longevity, performing in so many countries and having such a wide base of fans throughout the world, both young and old. We may not be world famous, but
we are certainly world known. Not everyone can say that...we are blessed and we know it.
• We have enjoyed performing in all corners of the world and have had so many memorable concerts, but the live performances that stand out are our shows with the legendary Cheo Feliciano and our performances in Krasnoyarsk, Siberia and in Cyprus...simply amazing!

** What about Latin Jazz? You include it in your live repertoire too which makes you different
than many other bands?
As we said earlier, one of our main influences came from Cal Tjader and his Latin Jazz Quintet. We do play many instrumentals in that style...we enjoy it and we think it shows.

** Nominated for a Grammy (and not just a Latin Grammy), what does it mean to you and don't you think this award can be expanded to recognize not only well known latin artists?
As you can imagine, being nominated for a Grammy by the National Association of Recording Arts & Sciences (NARAS) was very humbling and and a wonderful achievement of recognition for us.
Even though we didn’t win the Grammy, we will forever be known as Grammy nominees, an accomplishment that many great artists never get to achieve. As far as the second part of your question, I don’t know that the Grammy’s need to be expanded to include lessor known artists, as we certainly fell in that category, but we do believe that they need to be increased to include more
categories and styles of latin music.

** A new CD is released this year, this work remains true to your roots or any change occurs?
We are in the pre-production stage and still molding the type of record we want to put out. Considering that this recording commemorates our 50th anniversary, we may dig back into our roots growing up New York City and it’s cultural diversions for inspiration and sprinkle some of that into the new CD. So the new production will have some variety but it will also include a few instrumentals, more english language vocals featuring the unique voicings of Angel Justiniano and of course the “salsa dura” interpretations that we and our lead latin vocalist, Cheo Medina are known for.

** Tell us a bit more about the 50th Anniversary Tour, what does it mean to New Swing Sextet?
Not many artists are fortunate enough to span 50 years and still be relevant in their particular cosen field, so we are thrilled to be in this position, especially when so many of our new fans don’t even know we’ve been around for 50 years. Believe it or not, many of them think that we’re just a hot new band. That is so cool.

** What people, public and promoters, should expect from this Tour?
We will be performing and introducing material from the new CD. Also, the possibility of a guest artista or two, during this tour, is very possible.

** Being such an important celebration, who is going to organize it and why have you have decided to do it this way?
It is going to be a very important year for us and organizing a tour like this will take a great deal of time, preparation, planning, execution and promotion. If we did all of this on our own we wouldn't have time left to write and make music. To this end, we're very excited and fortunate to have been able to partner with Cat 7 Productions in Spain. They will be booking and organizing all of our tours. If you need information or wish to book the band please feel free to visit us at www.cat7productions.com for more information or via email: marcoscat7productions@gmail.com or susanacat7productions@gmail.com

** Finally, after 50 years of giving rhythm and joy to so many people...The legend continues?
How do you see NSS in the future and what are your short term goals?
We see NSS continuing to perform and create studio recordings for at least another 10 years. After performing in so many countries and continents we would love to play in places we have never had the privilege of visiting. Africa, South America, Cuba, Tokyo, Australia and New Zealand come to mind. We would love to do collaborations and special projects with other artists and it would be amazing to be nominated and win some Grammy’s. As far as short term goals go they all begin and end with our 50th year of music.

It has been a real privilege to sit with these guys. To sit with living legends through their unique and inimitable view of Latin Jazz, Salsa and more. If you are a fan, or in the music business and would like to take advantage of this amazing opportunity to have the New Swing Sextet perform their magic and give you the very best of tropical latin music at your festival, concert, or dance event, please visit Cat 7 Productions www.cat7productions.com email them at: marcoscat7productions@gmail.com or susanacat7productions@gmail.com